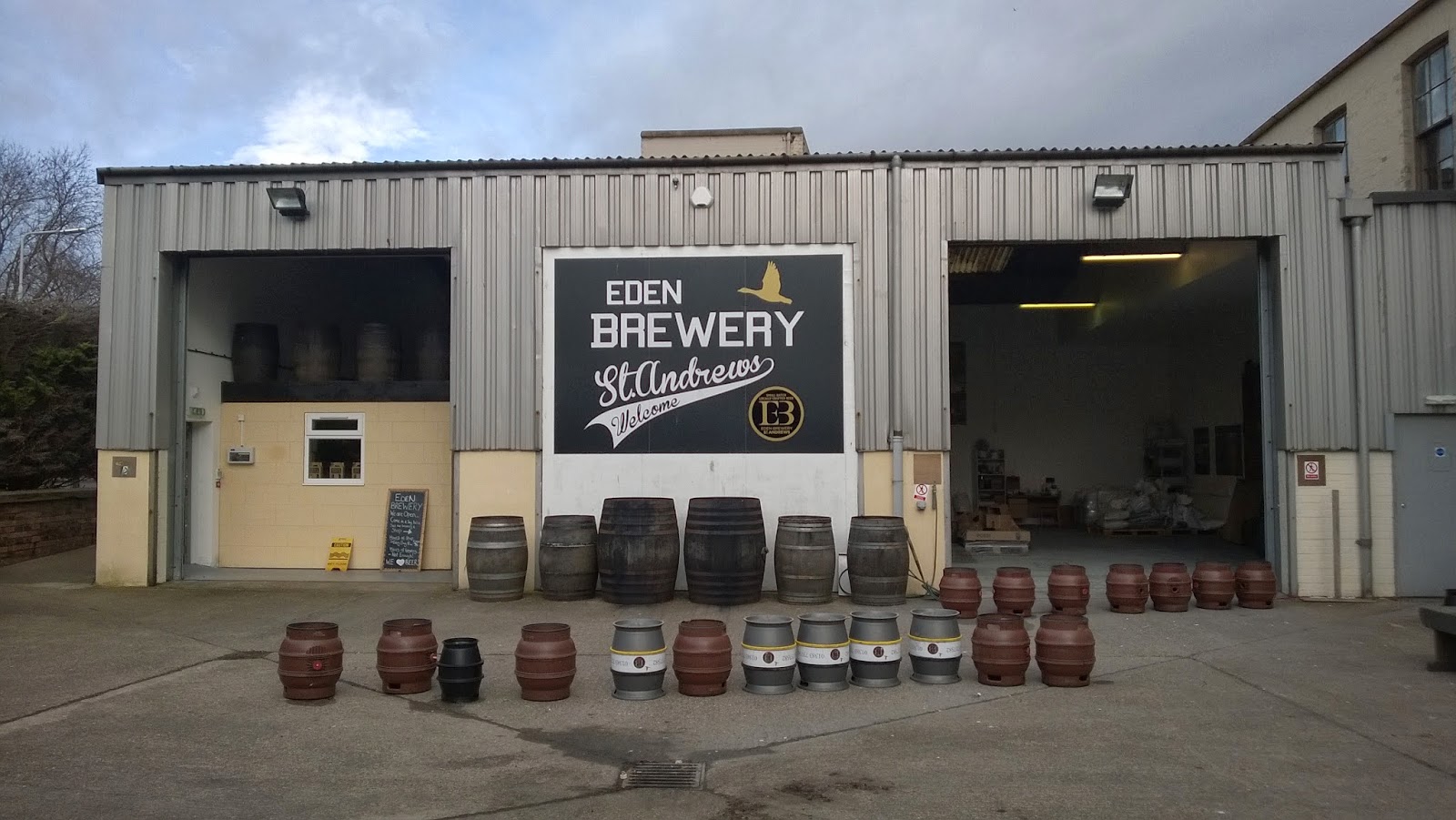 A glorious spring day prompted an overdue visit to the north east of Fife and Eden Brewery St Andrews. I’ve written about this local artisan company last year after stumbling across their own unique brand of beer at Stockbridge market in Edinburgh. Since then they’ve gone from strength to strength, winning awards and making inroads with local stockists, hotels and pubs.
Yes, normally beer isn’t my thing and I had outgrown it decades ago, tired of the typical tasteless over inflated components that only seemed to exist to flush through your system as quickly as possible. I’m sure some think the same of whisky and the effects of computerised scotch compared to a bygone era and sometimes I do agree with such a sentiment. Eden Brewery pretty much do everything by hand and while they have core ranges that are possible and pitched at the masses; it’s the special cask finishes that are really of interest to the palate. 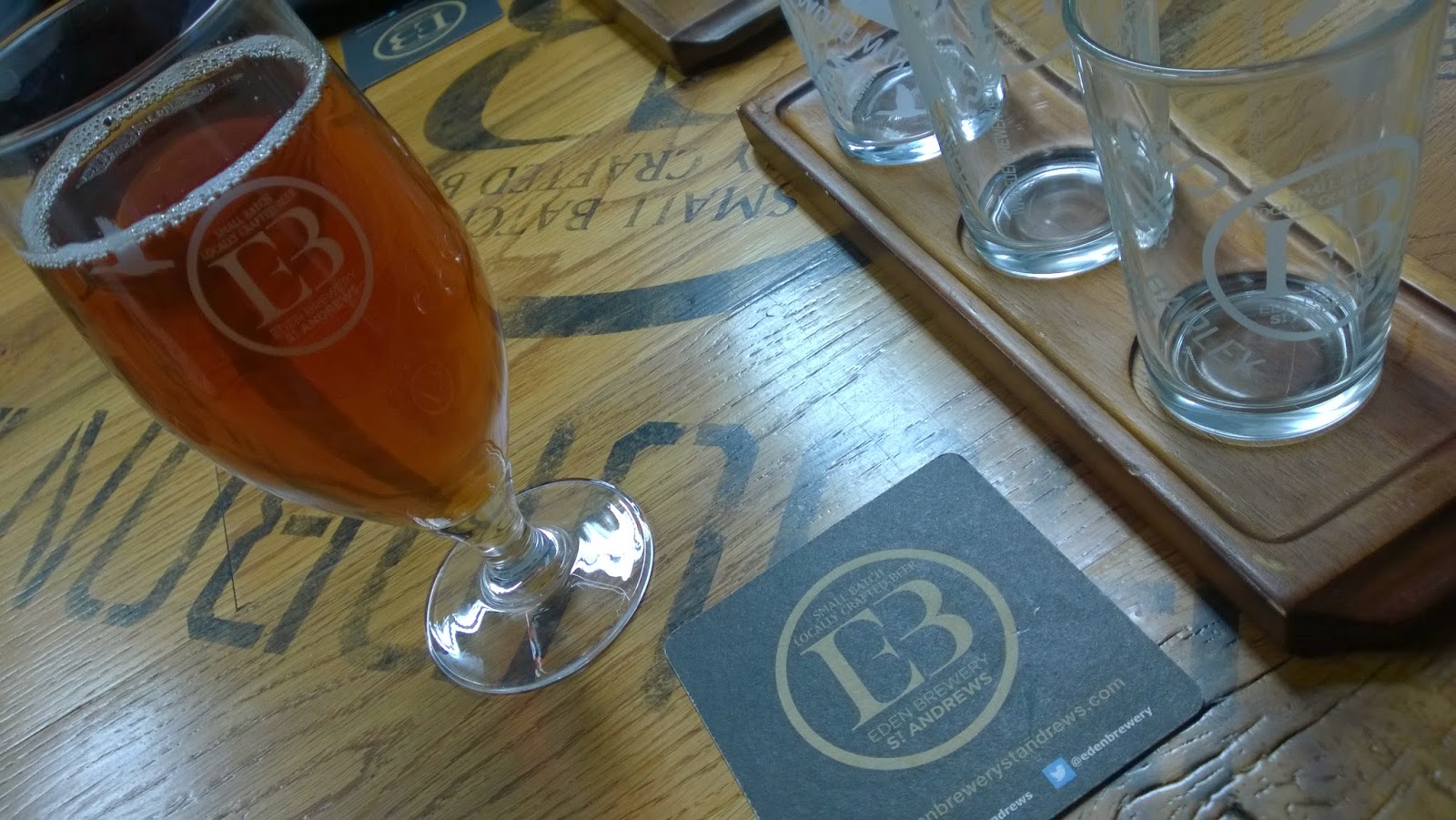 Set just outside St Andrews, the brewery calls home a former paper mill that closed in 2008 with the loss of over 600 local jobs. Going back beyond the mill itself, the site played host to a distillery in the early days of the Haig family empire. For a brief spell the distillery turned to brewing, before paper manufacture took over the site. St Andrews itself was host to a sizeable number of breweries before the majority died a rapid death during the 1800’s.
The site is now owned by the famous St Andrews University and Eden has invaded a small section. As the demand for their beers continues to grow, this year will see an expansion of the small but perfectly formed brewing area and production quadrupled.  Our Saturday tour was fully booked out and while the site is small, an hour is certainly needed to experience everything. Based on my experience making an advance booking is recommended. 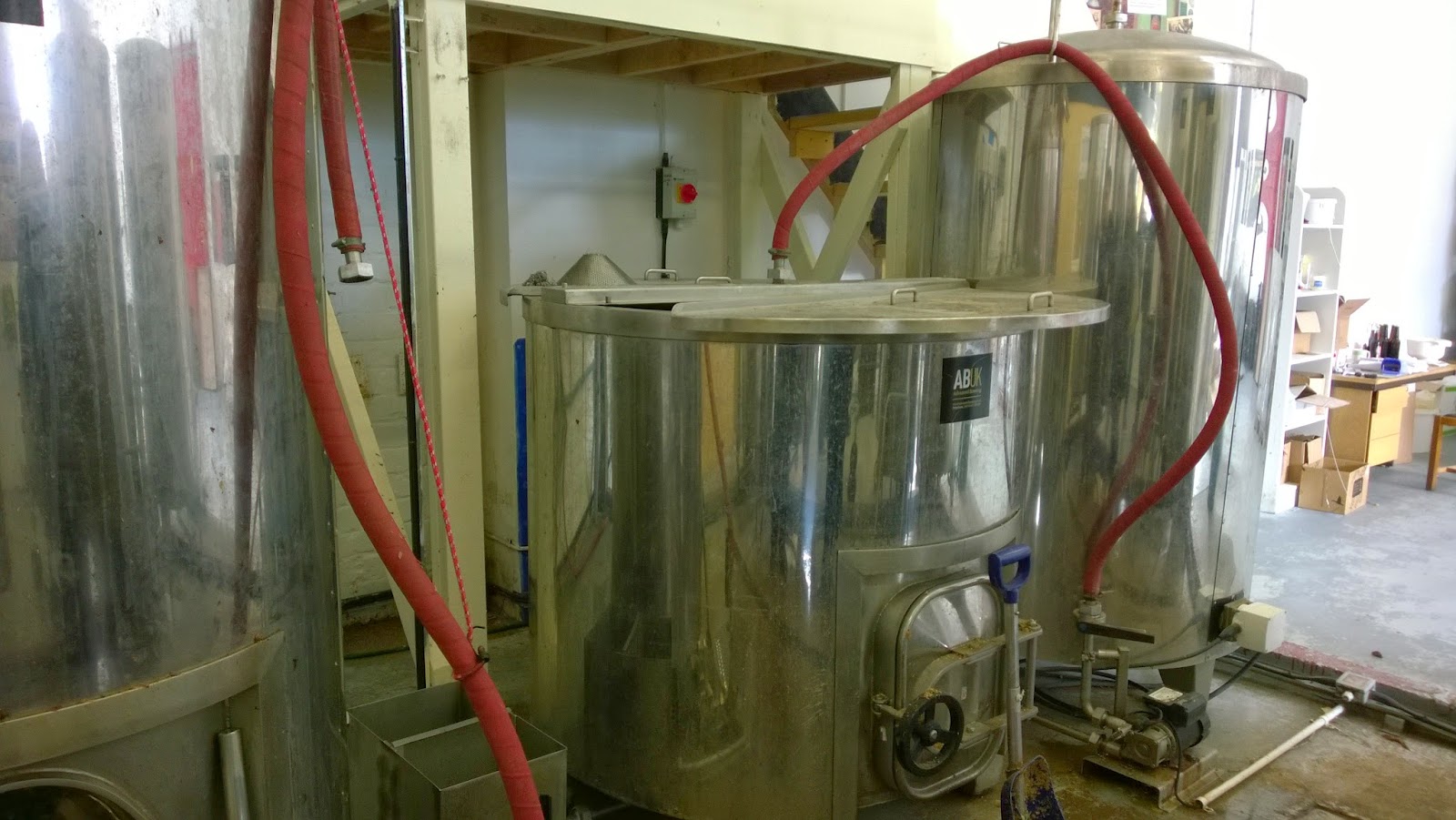 The very informative presentation and tour guide took us through the various stages of brewing and the hands on production, bottling, labelling and marketing that the team perform. In many ways this took me back to Bruichladdich before the take over and their attitude, passion and desire to experiment is infectious. I recall one year Bruichladdich released 42 editions of their whisky and keeping up with Eden is very much the same. Influenced by the core ingredients, their availability, cask purchases and events, the team are free to create and experiment without the long maturation of whisky. For instance their current Six Nations rugby bottle was conceived and released within a couple of weeks.
The tour is extremely generous with a welcoming half pint before you are taken to the tasting room for the presentation and tour, only to return for 6 samples of their current releases. This gives you an insight into the more commercially pitched releases and the popular IPA before the lovely sweet rum cask finish confirms how influential a cask can be. 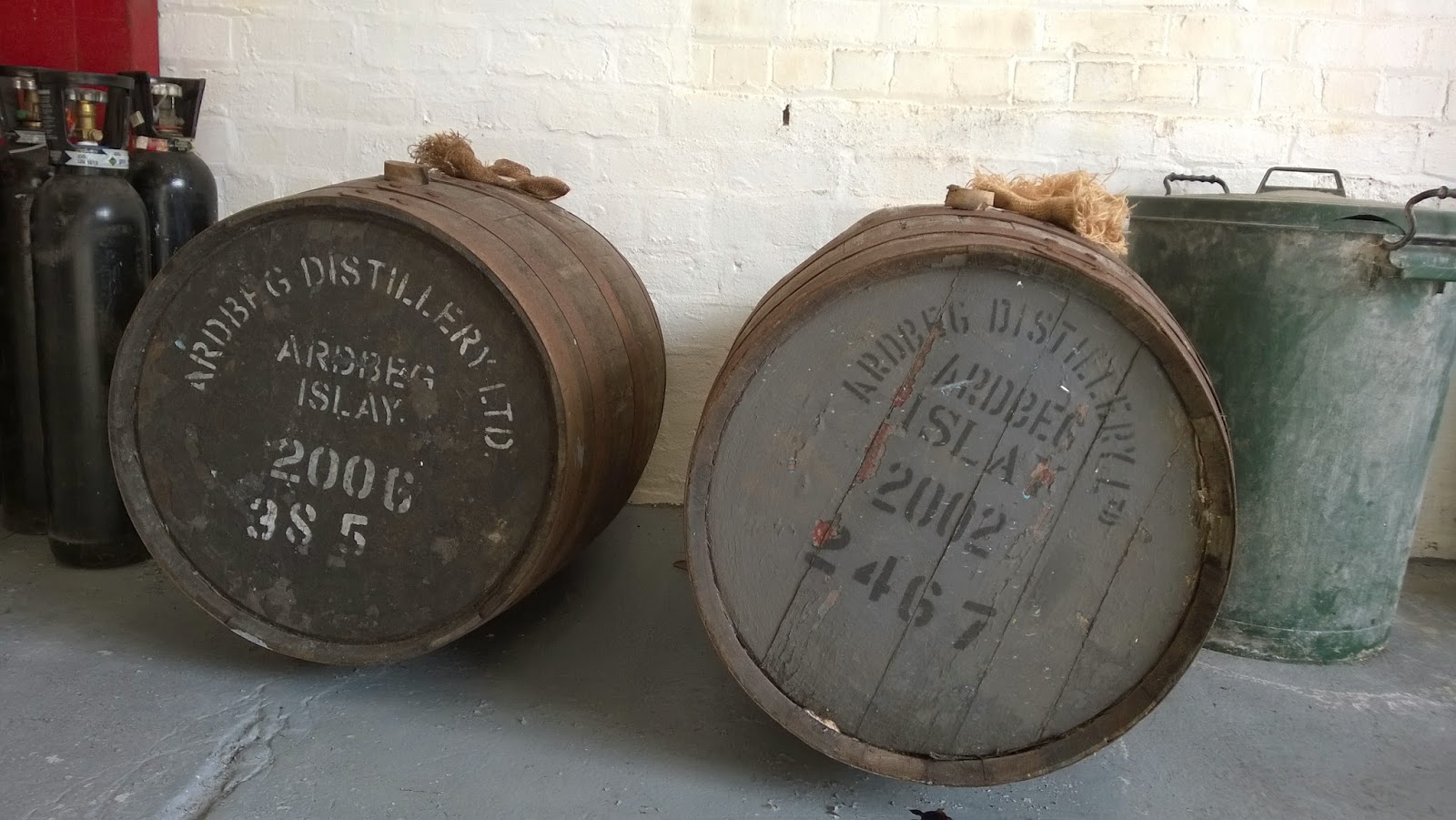 Whisky is my main interest and the team take advantage of cask availability to experiment and push those beer boundaries.  If you take the tour then you’ll notice a few casks lying around the place and I’m sure there are a few in the warehouse area as well. For instance I left with around 15 bottles but the majority of these were whisky influenced such as: 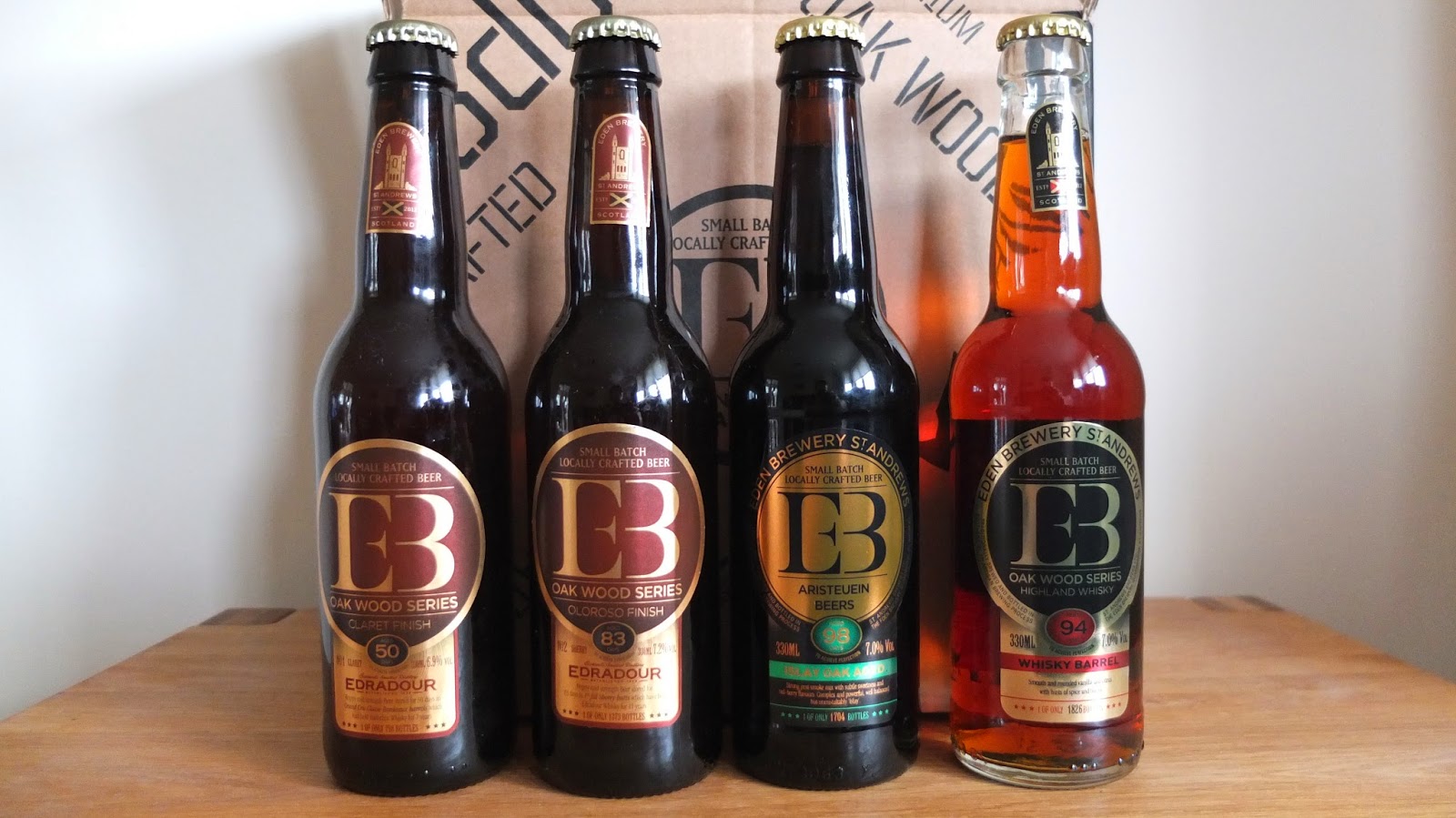 Some cynics might even remark that at last someone has found a use for something from Edradour distillery. I’ve been so impressed by the beers and tour that I have joined their beer club which means another tour as VIP experience along with a selection of gifts. I’ll look forward to returning to Eden at a later date and seeing how the changes unfold and if they make that move into distilling.

More photographs are available on the Facebook page right here.

**the Islay Oak is a thick and smoky beer with huge depth to savour.