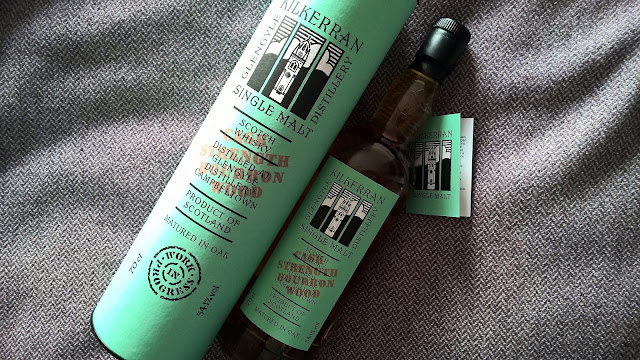 I really dislike Bon Jovi, Europe and all the other perm-rockers from the 1980’s and beyond. Annoyingly when faced with this Kilkerran Work in Progress 7, I just cannot escape the Final Countdown striking up its definitive tune in my sub consciousness.

Since 2009 Kilkerran has taken us on a journey characterised by annual chapters and releases of its whiskies in the form of the bourbon wood and sherry wood editions. These annual scorecards provide a fascinating liquid documentation of the ongoing marriage of the Glengyle spirit and its wooden host. As we slowly reach the summit of the first official bottling the trend has been very upward and positive.  On paper the culmination of this series is the final Work in Progress number 7 (WIP7).

I’ve already reviewed the sherry wood release right here and overall it was a thumbs up with the only criticism being the 46% strength that diluted the character within. I had held off purchasing the bourbon wood edition until friends started commenting on just how good it was. Part of the reason for their praise is that this represents the first time Kilkerran has been bottled at cask strength.

Word of mouth is one of the best indicators when trying to circumnavigate the labyrinth of new whisky releases. This is made more difficult by many bloggers/critics who just rewrite the official tasting notes and are afraid to bite the hand that feeds. Preferring to write favourable reviews and grant the majority of scores 8+ when clearly there is a sense of disappointment. Already this organic positivity is prompting WIP7 to sell out in some retailers. With just 6000 bottles released worldwide, your window of opportunity is closing fast.

Nose: what a lovely first impression! This noses like an old school malt with a level of detail lacking in rival aged whiskies. Very fruity backed up with vanilla pod and meringues. Whipped cream, Jacob's crackers, white grapes, a little lemon curd and coconut flakes. Beneath all of this backing up the old feel is a faintest wisp of smoke.

A touch of water amplifies the apples, peaches and that creamy essence which is more cream soda now.

Taste: more fresh apples and that waft of smoke once again that acts as seasoning. An entertaining interplay of sweet and sour further down the menu. Citrus with lemon dropping in and whilst it lacks that thorough dirty quality we often seen in Campbeltown malts there's a real organic and natural quality here I'm struggling to summarise. Utterly enchanting.

Whilst water is beneficial in all malts to a certain degree, this WIP7 is perfectly enjoyable at cask strength. There's truly something special developing here. The quality of this whisky shows up many distilleries who have been dumping young spirits onto the market as limited editions and fancy finishes. This is just the developmental stage and already its one of most impressive whiskies of 2015 I've experienced. Put it into context against those of a similar age and it remains in a class of its own.

Overall in any context this is very impressive stuff. I'm off to see if I can find any more bottles for my future enjoyment amongst the whisky shops of Edinburgh. If you're sensible you'll start looking in your area as well.