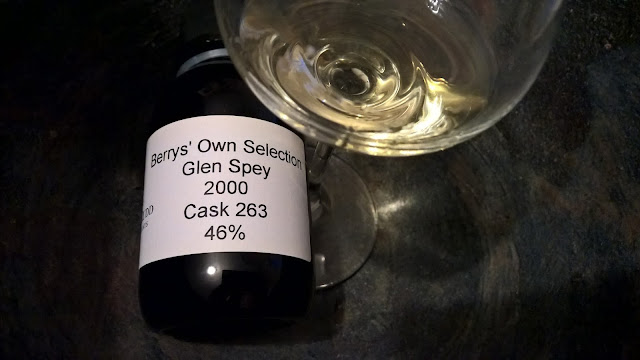 This is the third review of five covering some recent releases from London Wine & Spirit Merchant Berry Bros. & Rudd. By some wonderful coincidence we’ve been touring around Speyside with a brief foray north to Westport otherwise known as Glenmorangie. It’s been a fun road trip so far with our latest destination being Glen Spey, which is another overlooked distillery.

Situated near Rothes, Glen Spey was established in 1878 originally as an oat mill before thankfully changing to harness the water of life shortly afterwards. Just like Allt-a-Bhainne and Glentauchers that we’ve covered, the output of the distillery is mainly towards Diageo blends nowadays especially the J&B range. There have been only a couple of official releases over the decades including a limited Manager’s Dram along with a Flora and Fauna example meaning we rely on independent bottlers such as Berry Bros. to provide some insight. Tasting its whisky is an ideal opportunity as Glen Spey does possess some unique features including the spirit stills that run at a lower pressure than other distilleries. It also remains one of the few to use a purifier during distillation. Such a method increases reflux and thereby in principle creates a much lighter spirit.

Alfred Barnard visited Glen Spey as part of his epic voyage across Scotland’s whisky distilleries. As the newest of the distilleries in the district he toured the distillery and the nearby Rothes burn, which remains the water source today. A fairly short summary is his legacy noting the 'handsome appearance' of the buildings, the kiln fired by peat and the malting floors.

Even during these early years of Glen Spey, Barnard noted the low output of the distillery, which was approximately 273,000 litres. This pattern continues today with its annual capacity being 1.4 million litres that may sound like a huge amount but in the scheme of things today isn't huge. Although it does show how efficient distilleries have become since the olden days. This limited output partially due to its geographical location with remnants of Rothes Castle nearby and the existing land being filled by warehouses. Indeed thinking about this even more we should be thankfully the distillery survived the cull of the 1980’s, as many that were closed never to return did also suffer from being stuck in a confined location.

The nose had set the expectation of a little bit of peat but then a distinctive whisky. Initially this wasn't for me but the more I tried it, the more I realised this was a delight to sit down with and really explore also noting the price. Expect another Glen Spey review soon as it'll be the 2015 bottling for the Cadenheads Club.