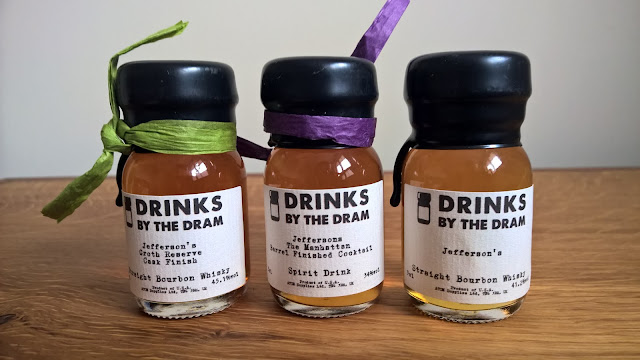 Bourbons currently seem pitched in an ongoing battle against Scotch for space on retail shelves. A prominent brand is Jefferson’s that I recognise, but until this Tweet Tasting event via The Whisky Wire had not sought out to experience.
Established in 1997 the Jefferson’s brand already has a remit to push boundaries whereas others will debate trying something different; only the brave will actually commit and taste the outcome. Researching Jefferson’s I discovered in 2012 they released a limited edition called Ocean which was a batch of Reserve bourbon aged for 4 years on the deck of a research vessel in the tropics. Perched on the bow for this period the experiment was to taste the effect of the rocking motion, the open and salty environment. Interesting stuff and not something you’d see happening with whisky due to the Scotchland rules.
Jefferson’s is traditionally mix of bourbon and rye. The family behind the brand does not own a distillery, which is often the case in North America with whiskey being concocted via third party suppliers. When I reviewed the excellent Wild Buck whiskey from Florida earlier this year here, my good friend Linh (who is from the States and works in the industry) commented she could tell this didn’t involve the MGP distillery in Indiana. For a Scotch enthusiast it is interesting to read about the existence of such facilities that exist to supply the basic raw spirit to the bottlers themselves.

This tweet tasting event was to celebrate the release of two new limited edition bottlings. The Manhattan is barrel aged for 90 days with Vermouth and barrel aged bitters - so lets indulge ourselves in Jefferson's bourbon!

Taste: very light in the mouth and pleasant. Vanilla is the dominate force with some white pepper, corn flakes before turning tart. The finish is interesting as its a little soapy - just a character I cannot pinpoint.

Taste: oaft! I don't like the texture of this it's too slick like a sheet of ice it just glides across the palate. Cranberries once again, sugar cubes, vanilla and grated dark chocolate. A slight bitterness to the finish and a debate whether you'd want another.

Nose: more nutty that vanilla driven now with some white chocolate. Hazelnuts and walnuts and herb-edge are evident, orange juice, apricots and a touch of Irn Bru. That's probably the sticky confectionary note I'm picking up with a splash of rust.

Taste: my first impressions are this needed to be a higher strength as it difficult to separate this from the Manhattan in terms of texture. Raisins, plum jam, maple syrup and an echo of rye rounding off a calm experience.

So a very interesting trio which heightens my interest in other Jefferson's releases and the burgeoning bourbon market in general.