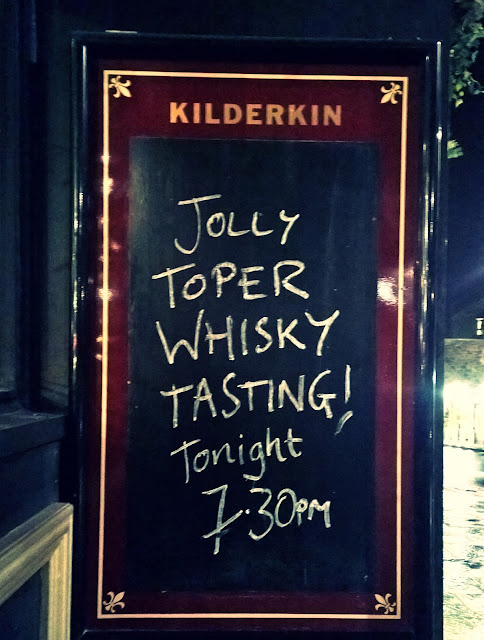 The Jolly Toper whisky tastings are a regular Edinburgh event and a must experience for any visitor to the capital. Having attended these on an ad hoc basis over several years I felt it was an opportune moment to recreate the format here.
Traditionally held on a fortnightly basis every Thursday, the tasting kicks off at 1930 and can last until 2200 or beyond depending on the interaction from attendees. Normally at least 5 drams are poured and vetted by Mark (Jolly Toper) in advance so you’re guaranteed an interesting variety. Ticket prices do vary as depending on the theme for the tasting, a budget for the whiskies will be determined. For instance the event I’ll cover here was £20 per person whereas the Closed Distilleries tasting last month came in at £30pp. Both represented value for money.
The current venue is the Kilderkin on the Royal Mile so it’s a central location and they serve a decent selection of pizzas at the bar. Quite often there are pre and post drinks, whilst the tasting itself is held through the back of the bar.

Unfortunately I was unable to stick around for the 12th November tasting due to the poor weather conditions and driving. For those faced with being unable to drink there is the ‘carry out’ version where you can pick up samples of the tasting whiskies to enjoy in the comfort of your own home minus the vibrant atmosphere. Ok, let’s begin.

Imperial 1995
Bottled by Signatory, 57.2% vol, £80
Colour: margarine
Nose: crushed almonds and a frangipane tart with tinned pears. Icing sugar, ripe bananas, apricots, faint strawberries and coconut.
Taste: not as pronounced as the Imperial we had in the previous tasting despite being cask strength. Green apples, a pinch of salt, shortcrust pastry, a slight sherry influence and sugar cane.

Overall: a nice Imperial and nothing to dismiss the growing appreciation for this bulldozed distillery. I still prefer the Gordon & MacPhail bottling though.

Benromach 10 year old
Official bottling, 43% vol, £33.95
Colour: pencil shavings
Nose: the usual suspects with honey and vanilla but put those aside. A leathery note with cinnamon and a drop of treacle, pears, lucozade and a hint of smoke. With water the odd resurrection of calamine lotion but in an enjoyable way!
Taste: syrup and buttered toast so a charred aspect and oily sweetness. A strong emphasis of vanilla from the wood but a rugged quality than essence. Milk chocolate, raisins, cloves and almonds.
Overall: a lovely and light texture; full of character that I wasn't expecting. Reminds me of the 1970's Glen Grant in places I reviewed recently. Funnily enough I reviewed this 10 year old last year here so I can only presume they've improved with subsequent batches. Speaking with Mark recently he agreed there does seem to be some batch variation.
Flaming Heart 15th Anniversary
Bottled by Compass Box, 48.9% vol, £99
Colour: chardonnay grape
Nose: breakfast bar cereals, fresh wood shavings, white grapes, apples, pears, sunflower oil and limes. A real emphasis on fresh casks here.
Taste: not what I expected with the nose as the smoke comes to the fore perhaps too much. Eucalyptus, salt and walnuts. Not really much else between the smoke and freshness there is no place to hide or prosper.

Overall: very pleased I never bought a bottle of this. Has been hyped in some quarters but I found it somewhat one dimensional and disappointing. Perhaps just my own taste? I do love the bottle design though.

Macallan 12 year old Sherry
Official bottling, 40% vol, £62
Colour: cherry wood
Nose: chocolate, raisins, new leather or those fake sprays to fool you its leather, cherries, fruit loaf, hot cross buns and muscovado sugar.
Taste: bitter disappointment as the essence and character has been sapped out of this dram bottling at 40%. Macallan boast about the best casks but when you water this down its like substituting a potential Leonardo Da Vinci for an artwork taken from the unsold pile of your local art club. Caramel, cinnamon, cloves, cherry, clementines - in fact all the C's including crass.

Overall: £62 seriously? Priced for idiots and fashionistas who drink from tumblers. It reminds me of standing amidst a historical ruin trying to imagine what the building during its glory years. This Macallan 12 is a pale shadow, a ruin if you will, of its former glory. It's not a bad whisky, as it is passable, but at this price what should have it offered? An example of modern production and maximising revenue.

Another well put together tasting experience with some eye-opening experiences such as the Benromach 10 year old that destroys the Macallan 12; who would have thought it? That's what I enjoy about the Jolly Toper tastings apart from the regular characters who attend. You'll go in looking forward to experiencing a particular whisky and depart with a whole new appreciation of unexpected delights.