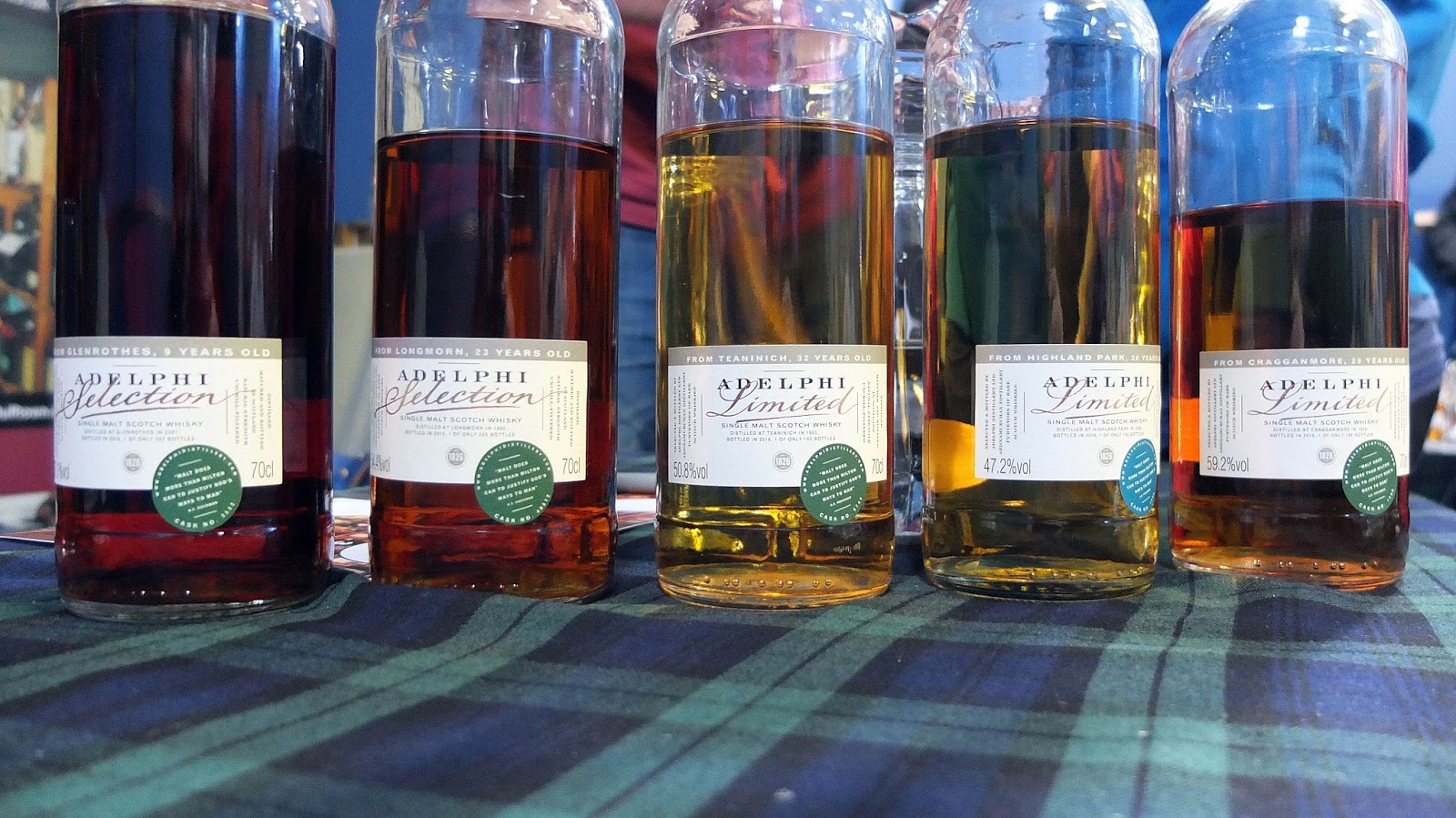 A little downtime was required after a couple of epic days on the road with #thetormore4 experiencing everything that the Spirit of Speyside festival has to offer.

To offer a more relaxed setting, back-to-back tastings were decided upon at the same venue in Dufftown, which is the equivalent of whisky central or at least it certainly felt that way over the Festival weekend. Next door an all-day whisky event was in full swing and local shops were enjoying the increased footfall on the street. Bookmarking the village hall festival for another year, our group decided to experience the latest from two independent bottlers. The first of these was Adelphi with Antonia Bruce taking us through their festival selection, and then unleashing Jan Beckers who is the malt ambassador for Douglas Laing. As Adelphi were first it seems only polite to talk about their tasting initially, with Douglas Laing to follow in a later article.

Both events offered an interesting contrast as you’ll discover across the course of these two articles. For Adelphi it was really all about the whisky with a brief introduction before jumping into the range of whiskies they had brought along. The setting was the St James’ Masonic Hall on Albert Place.  Organised by the Dufftown whisky shop, all of the whiskies plus a few more were on offer at special prices for attendees. If you liked what you tasted, then it was simply a case of staggering down the road and making that informed purchase. The only exception was the Glenrothes sherry monster that had sold out already; we seemed to have an influx of sherry enthusiasts possibly?

Sitting amongst a packed and fervent hall of attendees, our group had strategically positioned themselves against a wall and could view both the clientele and presentation with ease. A disorderly carnival unfolded with interjections being required so attendees could hear the presentation. This led to repetitive questioning about what the whiskies were and their age, as the boisterous atmosphere took a grip. Then one particular interruption seemed to focus on the final dram being youthful, or at least that’s what I took from the disparaging tone. Perhaps there is a belief that the final whisky should be something marvellous? I’d hazard a guess that most of the onlookers being enthusiasts realised tastings can also be designated by characteristics. Why start a tasting session with a sherry monster and inhibit almost all palates for the duration of the event?

I felt sorry for the Adelphi representatives who were trying their best and the Whisky Shop organisers who tried to keep the event orderly and appreciated. A tight timetable meant that things did have to flow in a fluid fashion. Adelphi are also big supporters of the tasting events held annually in the hall, having visited each year since its inception. The whisky consensus from our table was positive even in this turbulent environment. Unfortunately as the dedicated driver I had to park – sorry couldn’t resist – my samples for another time. In retrospect, back at home and in a controlled environment I can truly do them justice. 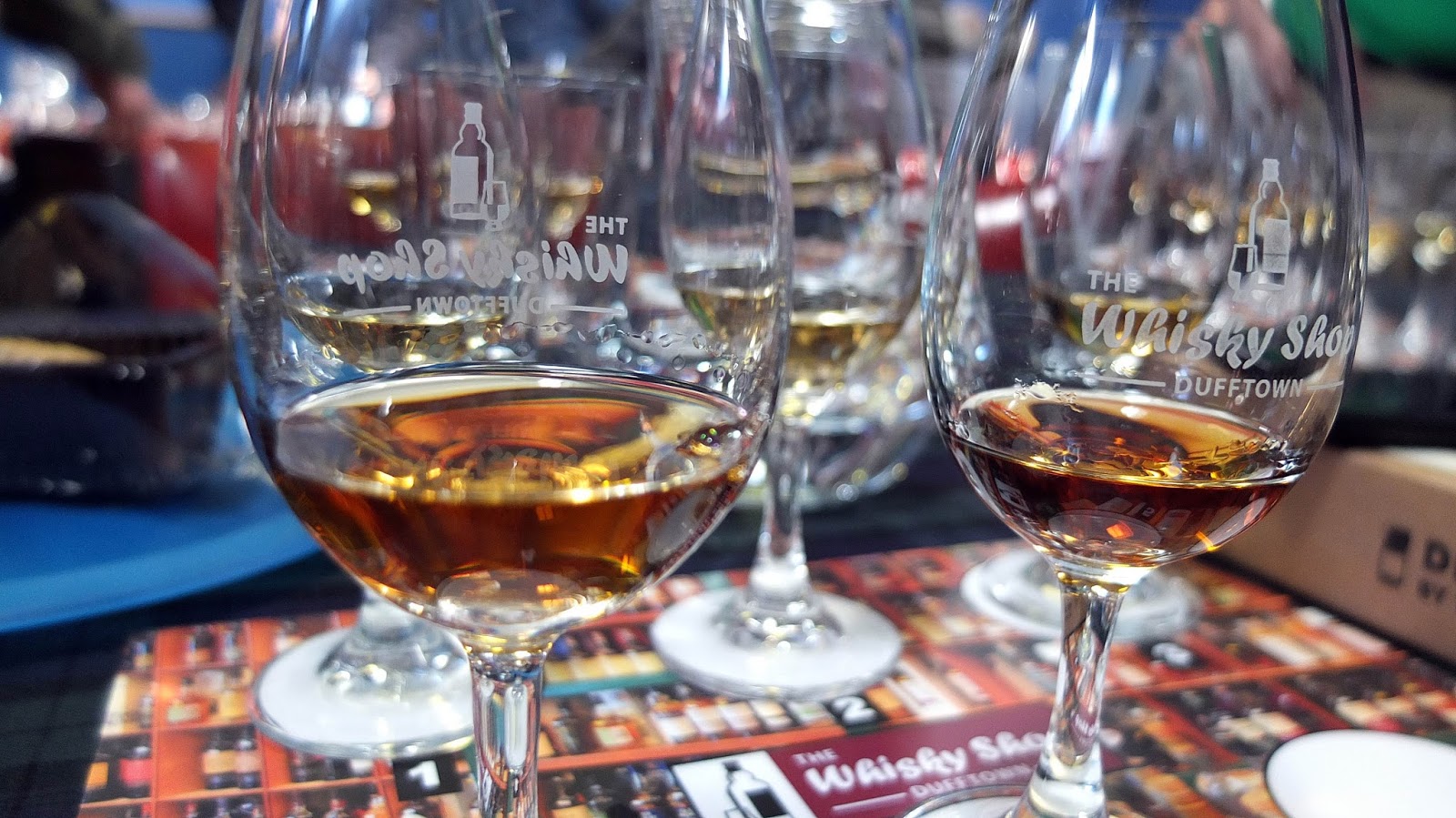 Colour: a faint caramel
Nose: pine cones flushed with lemon jif and sandalwood. Pink lady apples and a really dry reed note followed by butterscotch. A little coconut but this falls into many Highland Park ex-bourbon casks I've had over the years; they're just a little dull.
Taste: Jacobs crackers flushed with white grapes and white pepper. Just not feeling the love here. A dash of vinegar, cheap vanilla extract and a lemon cheesecake filling.

Overall: a Highland Park cask that's not really going anywhere. Requires a real flush of sherry to turn it into something more worthy of the price tag. The wood has had a firm grip on this one for too long.

Colour: olive oil
Nose: old fashioned lemonade, buttercups and sandpaper. Digestive biscuits and oat cakes with an oily aspect; perhaps melted butter. A vanilla nougat combined with an assortment of chopped nuts.
Taste: interesting dram this as upon first tasting there are only a handful of characteristics but mingled superbly and to great effect. Very malty, with grapefruits and green apples. A sour cream with some chives and balsa wood.

Overall: I do like this Teaninich, but would have never picked it out as being 32 years old. What it does well within a limited range is marvellous but not for everyone. You're paying for the maturation here and ultimately not a rich whisky experience. The choice is yours.

Overall: nothing m-a-s-s-i-v-e here just a gentle soul, content to do its own modest thing. Unlike the superb SMWS 37.67 Cragganmore Tongue Tingling Treasure bottled also at 29 years age.

Colour: caramelised orange
Nose: burnt sausages and a rich beef stock. Ginger nut biscuits, candied orange and a Highland toffee bar. Vanilla cream with a sticky toffee pudding and a touch of plasticine.
Taste: more toffee notes and some fresh toast. A honey and red berry granola combo followed by ginger and cranberries. A hint of black breakfast tea throughout that leads into the finish.

Overall: a great nose that goes from savoury to sweet with a chameleon like nature. The palate upon tasting doesn't match the expectations but I believe this is one of those bottles you'll grow to love and appreciate over time. It's certainly one I'd consider purchasing at what is a very fair price.

Colour: bonfire toffee
Nose: squashed raisins, a luscious hot chocolate with some faint mint leaves and beeswax polish. Blackcurrants as well but a limited profile without some water. Addition of brings out pencil shavings, cinnamon and cloves in a delightful can-can finale.
Taste: caramelised sugar, dark chocolate and more treacle. It's surprisingly fine to drink at cask strength! A winter warming pick me up; you can keep your mulled wine. A real bitterness from the pungent wood and a strong emphasis on vanilla.

Overall: this is apparently the latest in a series of young Glenrothes sherry casks bottled annually by Adelphi. Limited character profile but a really strong wild buck with a kick. Retailing at a reasonable price I can see why its so popular.

So there you have it. The first of our double header tastings is at a conclusion after what must be said was an impressive array of whiskies. After this we retreated to a nearby cafe area to engage with social media before entering the hall to experience something totally different via the Douglas Laing event. That'll follow very soon.