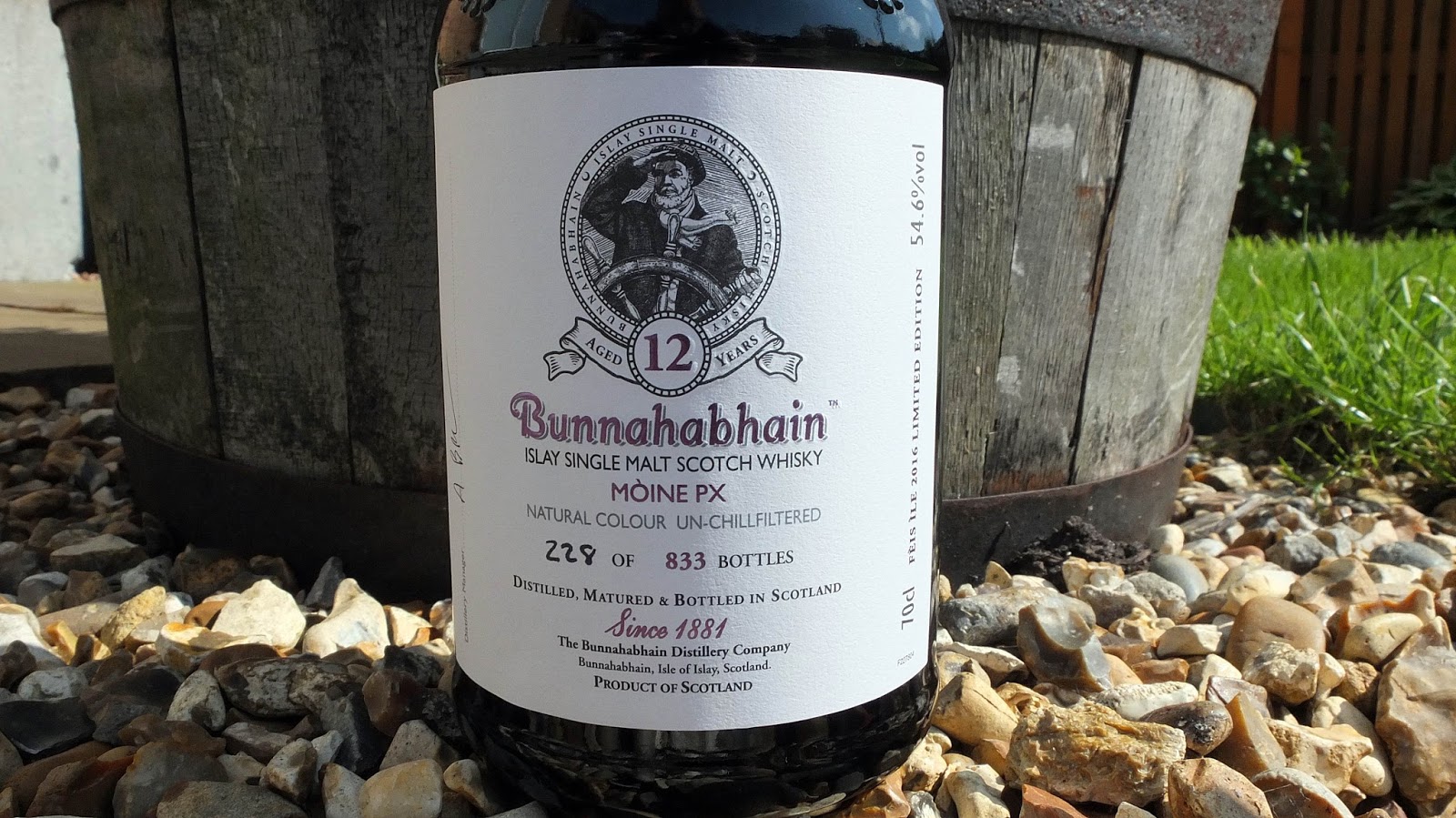 This is the second of two releases by Bunnahabhain to celebrate the 2016 Feis Ile. I’ve already reviewed its older brother in the form of the Bunnhabhain 16 year old Amontillado which came in at £250 and was limited to just 250 bottles.

This younger sibling is 12 years old and a larger out-turn of 833 for a reasonable £95 asking price. Being from the Moine range at the distillery, this is a more heavily peated expression than your usual Bunnahabhain. In fact Moine is Gaelic for peat if you didn’t know. I purchased this bottle as part of my Bunnahabhain Feis Ile Day Tripper event to Islay and the distillery for the 2016 festival.

From my time spent in the distillery shop this was the most popular bottling ringing through the cash-till closely followed by appreciation for the 12 and 18 year old expressions. This release was available for pre-order from the Monday of the festival at the distillery but this didn’t stop the queues or interest in what Bunnahabhain had served up for the Feis Ile.

The spirit was filled into what I expect was ex-bourbon casks (not stated) in January 2004 and kept in warehouse number 7. This is a sea-facing warehouse at Bunnahabhain where they matured for 9 years. Then the spirit was placed into Pedro Ximenez casks for an additional 3 year period before being bottled at 54.6% strength for the Feis Ile. 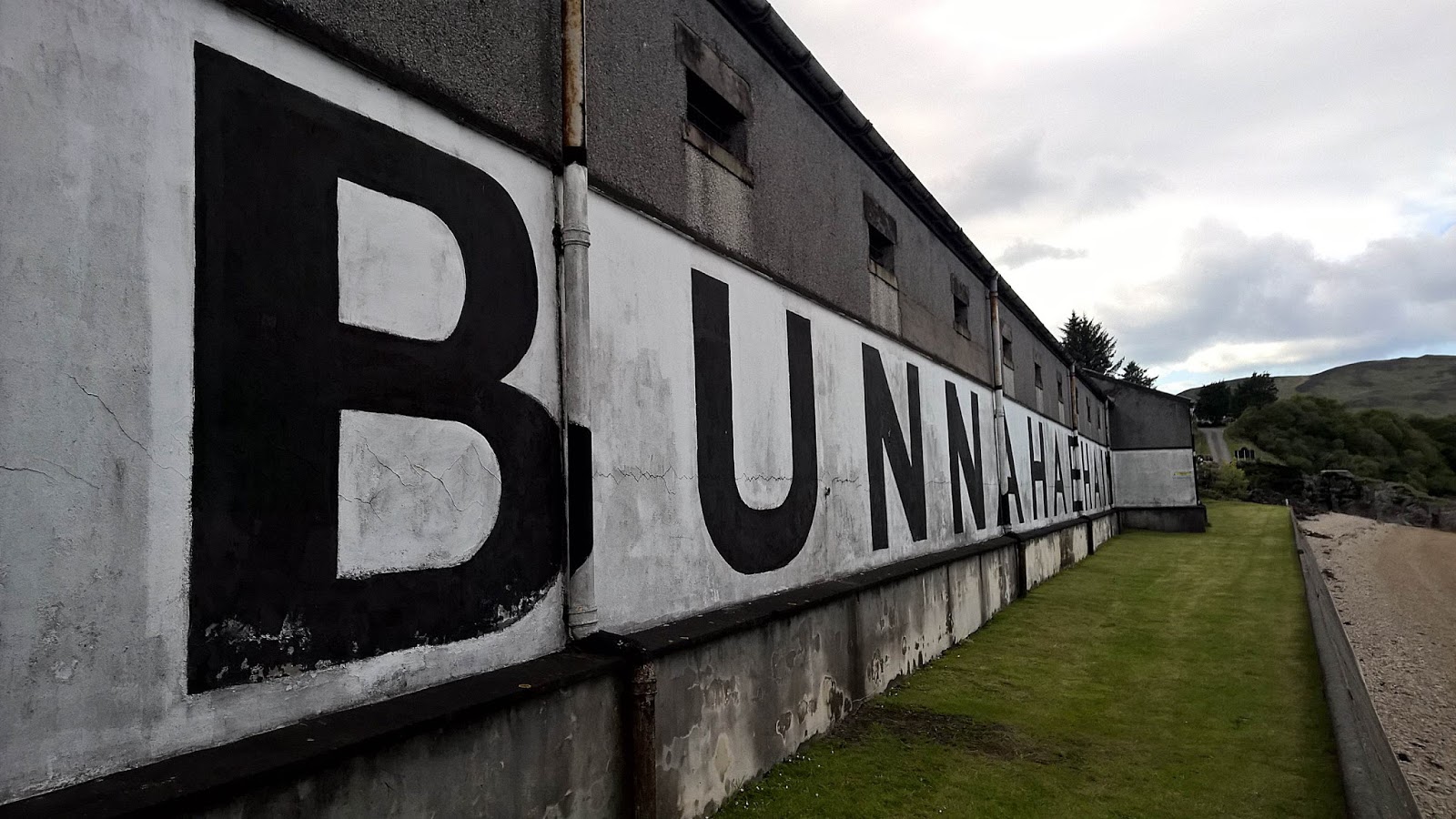 Colour: golden syrup
Nose: this does benefit from a bit of patience as initially it seemed rather tight and yeasty with some freshly baked shortbread of all things including a bit of sweetness. Camp fire embers slowly fading away as is the light smoke and dirty vanilla. Stepping beyond this frontage with the assistance of a bit of water more familiar characteristics appear; old oranges that have lost their sparkle, a measure of sea salt and thyme. The PX cask has injected a light layer of brown sugar, raisins, cranberries and that extra dimension.
Taste: raisins again with a hint of sweet raspberry freshness. An enjoyable texture, very pleasurable a little more classy than a staple Bunnahabhain. Coffee beans, white pepper and that vegetative aspect are present. Lemon on the side and more sea salt taking us to the coast. The peat influence isn't as sizeable as I anticipated, the PX has taken off the rough edges leaving decaying foliage, red liquorice and a little dark chocolate. The finish is a gentle mix of ginger with a raisin and biscuit Yorkie bar - I haven't had one of those in ages come to think of it...

Overall: a different beast to the more rounded Bunnahabhain 2016 Amontillado Feis Ile 16 year old and as such my favourite of the Feis Ile bottlings I've experienced for this year. Its a gentle reminder that the spirit may come from the same stills and rest close to one another, but the influence of peat and a cask can deliver a polar opposite much like the flipside of the same coin.