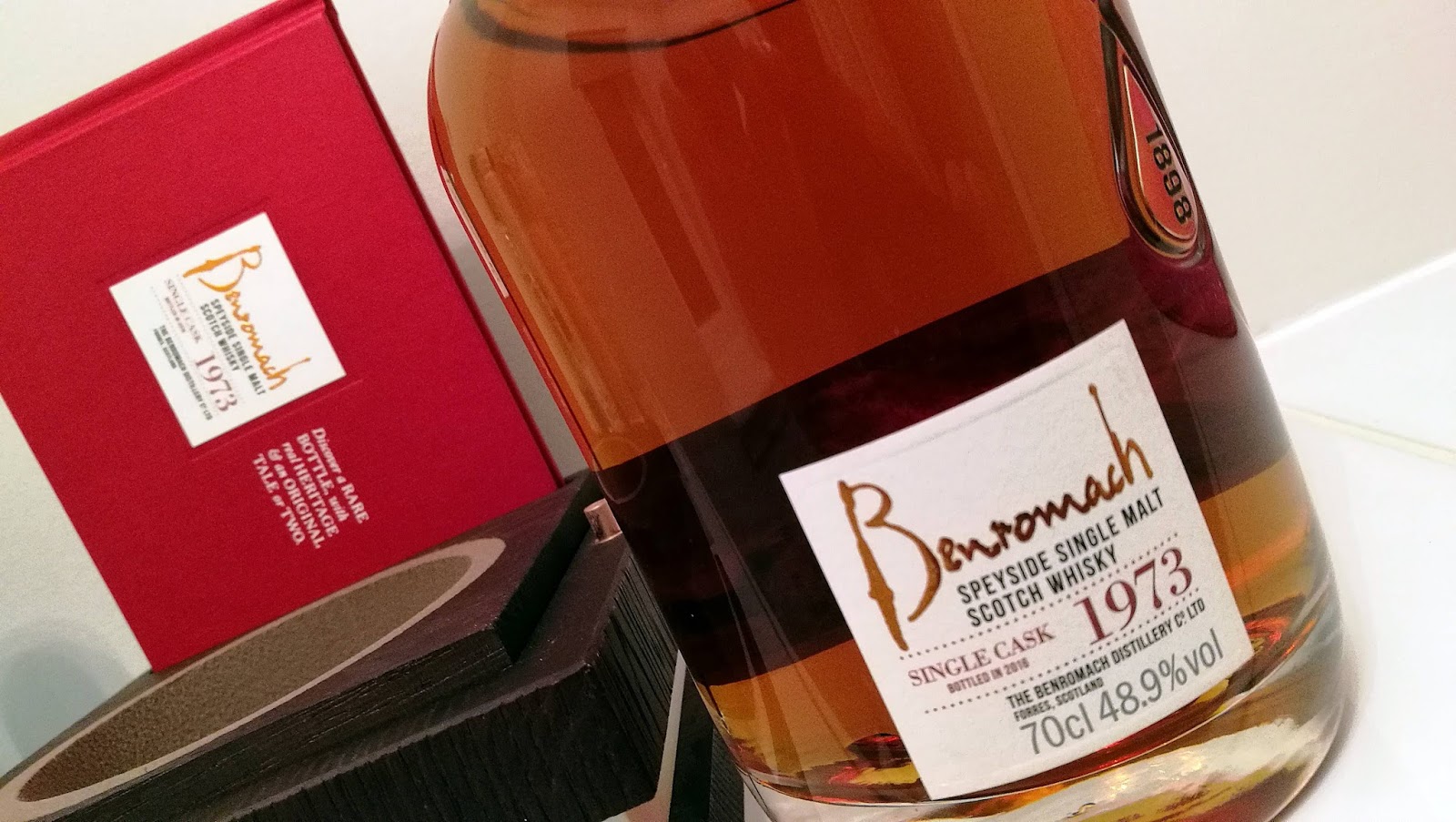 I had the opportunity to try this very limited 42 year old Benromach as part of the 100th Tweet Tasting event organised by the Whisky Wire. This online experience was actually a celebration of reaching a century of tastings and given how epic the 98th edition was courtesy of Gordon & MacPhail’s Rare Vintage, the mind boggled about bettering what had only just gone before.


In reality it’s not about one event outdoing another, but rather a celebration of whisky itself. Given that Benromach has been so wonderfully revived by Gordon & MacPhail in 1998 it seemed a fitting choice. This whisky was distilled in the year of my birth and 1973 generally is a cracking year for whisky in Scotland with some remarkable bottlings; could we count this 42 year old Benromach within such a hall of fame? The event itself featured several other whiskies from Benromach that you can read about right here including the 10 and 15 year old expressions.

Entitled the Benromach Heritage, this whisky is a single cask release. Specifically a refill American hogshead, cask number 4606 has waited very patiently for its moment in the spotlight. Distilled under the old regime and bottled at 48.1% ABV, the cask has resulted in just 52 bottles which are exclusively available to the UK market. This is one whisky in all likelihood I won’t be experiencing again although the retail price of £1,395 seems entirely reasonable in the current market conditions. Compared to Glenlivet, Bowmore, Macallan and their ilk this is practically chump change. Believe me the best of Benromach can easily match those distilleries as well.

For those looking to purchase one of the 52 bottles then for your outlay you’ll receive a decanter style bottle that takes its inspiration from the distillery stills. These again inspire the wooden packaging alongside the wooden washbacks and the package is completed by a book detailing the history of the distillery. I just have to make do with the promotional material and sample vessel. A sad state of affairs but still a marvellous opportunity and one I’m thankful for. If this is a little out of your price range then I can recommend several entries in the core range starting with the wonderful Benromach 10 year old.

When you’re visiting Speyside – and you must as a whisky fan – it’s easily to become focused on the heartland of the region, which is in and around Dufftown. The true crown of Speyside is just a few miles west of Ballindalloch at Tormore distillery, but visitors often travel along this road – back and forth – without venturing north too often. Take the road to Elgin and sweep around to Benromach distillery. It’s a quaint and relatively unspoiled example with recent improvements not hampering the history of the site. Hopefully all going well #thetormore4 will fit in a visit during the 2017 Speyside Festival, as it escaped us in 2016. 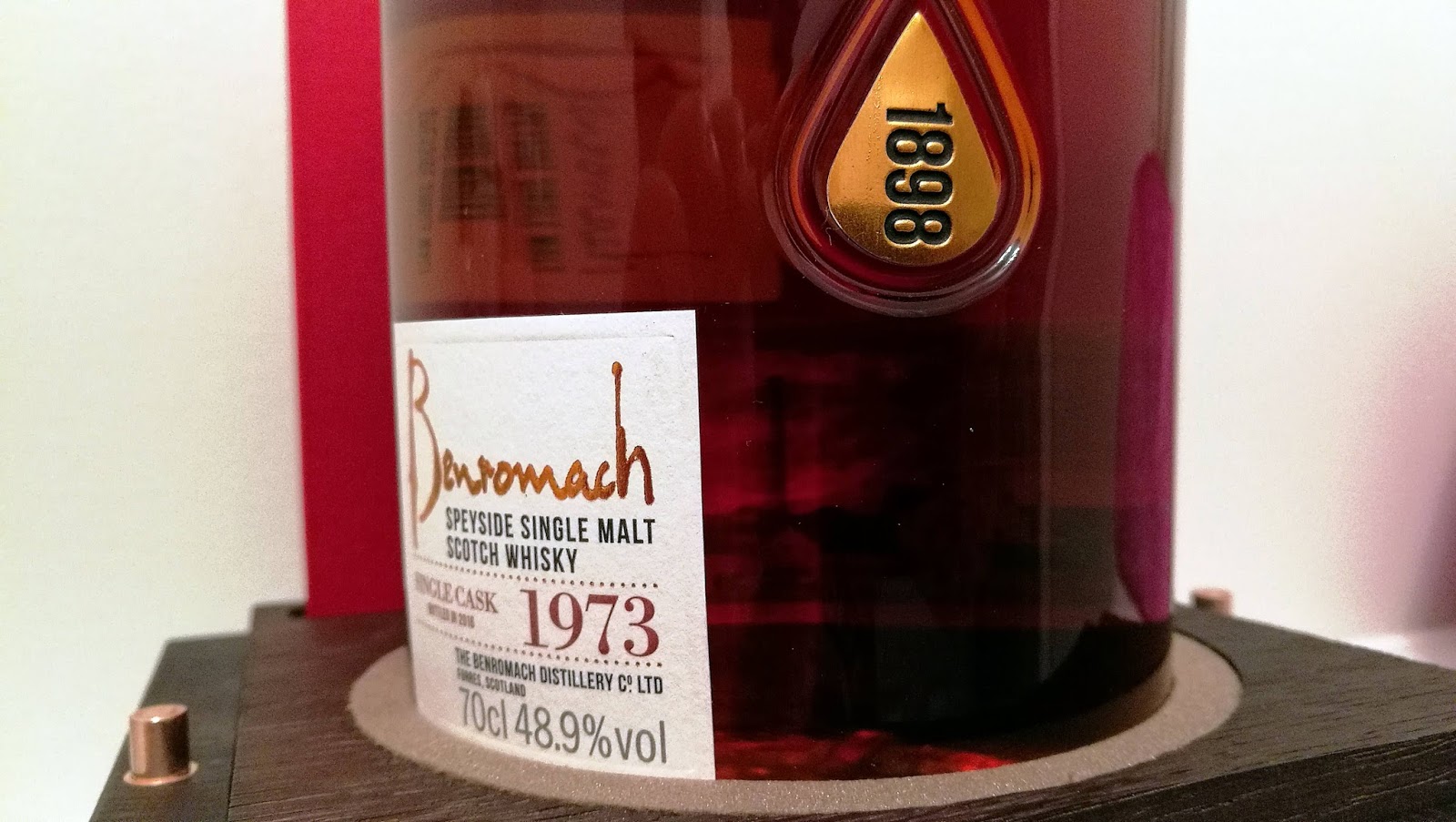 Now I think we’re all set for this remarkable whisky on paper. Whenever I’m confronted by a whisky with such as a long period of maturation, I do like to put the era of distillation into context. For Benromach 1972, sadly the floor maltings were phased out in 1953. However in 1974 the mash house and the tunroom were both modernised, so this is post-distillation of this whisky and now for the main event.

Colour: Japanese gold leafed maple or an acer if you prefer
Nose: immediately its butterscotch and cinder toffee. I can fondly recall being at Beamish and their old sweetie shop when the latter was brought out to set and then smashed up. The room filled with sugary aromas and caramelised delights. Redcurrants robustly arrive as do hazelnuts and pralines cut through finely by fresh Scottish raspberries. I'll even say rum fudge! Sweet Spanish tobacco, candied orange slices and vanilla almond granola.
Taste: utterly distinctive with tinned clementines with a lingering sense of liquorice and blackcurrants. A resin-like texture that sweeps across the palate and a lingering sweet honey peppery finish shrouded in a delicate smoke. Returning to the main body there are elements of lime, pineapple, mango, nuts and caramel all at play. Wonderfully balanced and a classic example of spirit and nature in unison.

Overall: This 1973 Benromach is one of those really special drams. Already shooting into my hemisphere occupied by the 1974 Ardbeg, 1970's Tormore's and Brora's, 1960's Macallan, the George Strachan Rosebank and that 1974 Deanston Oloroso sherry cask. Yes, it's right up there and maybe I should purchase a bottle...