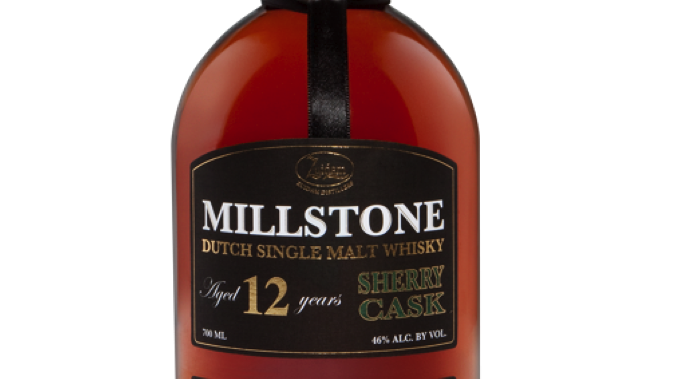 It seems only apt that the Netherlands plays host to a whisky distillery of its own given how passionate many of the natives are regarding whisky. Today we’re taking a trip with a 12-year-old Millstone from Zuidam distillers. This sample was kindly provided by WhiskyLifeStyle and I have tried whiskies from Zuidam previously under the UK independent label Discovery Road including a rather tasty rye and a very drinkable 14-year-old single malt.
The distillery takes its name from the family that own and run the business. It’s very much a family enterprise with Fred starting the distillery in 1975 and his wife designed the packaging before the next generation in sons Patrick and Gilbert took over the day-to-day running. Their emphasis has always been using natural ingredients to produce the best possible products with a hands on rather than computerised approach.
Today like so many distilleries it caters for a variety of spirits including liqueur, gin, rum and a even genever range. Even when it comes to whisky there is a great deal of choice on offer whether it’s a standard 5 year old ex-bourbon matured bottling to a lightly peated expression of the same age. You can jump up to a decade with either the French or American oak bottlings which would make an interesting wood comparison. Then there are the occasional special bottlings such as the 1999 Pedro Ximinez cask and least we forget the excellent rye bottled at a minimum 5 years of age.
Zuidam bottles its whisky under the name Millstone and this release dates from 2001 before being bottled at a minimum age of 12-years-old from a sherry cask at 46% strength. For the first 8 years, the whisky matures in American ex-bourbon casks before spending the subsequent 4 years in Oloroso barrels. Normally you'd expect to hear that these are sherry butts, but (sorry) here Millstone have created smaller casks from very old Oloroso casks. By doing this the size has been condensed from 500-600 litres to a more manageable 250 capacity. This means more interaction with the wood resulting in more flavour. The emphasis on very old comes from their description and older sherry casks are at a premium nowadays. Overall you have to view this as a double maturation rather than a finish or full maturation in a sherry cask. The bottle is a little misleading in this respect as you could be forgiven its sherry all the way rather than a 4-year residency.

There are various batches and from what I’ve seen these could be adorned with an increased age statement, but Zuidam have kept the 12 consistent. Their whiskies are well distributed and in the UK this release will set you back around £77 online. I have high expectations for this release given my previous encounters with Millstone so let’s see how our Dutch friends are developing their whisky skills.
Colour: treacle
Nose: a very approachable and engaging sherry aroma with oranges, ginger, cinnamon bark, cracked walnuts and a resin-like coating. Water brings out sticky toffee pudding.
Taste: impressive arrival and body that moves sweetly into a tobacco finish. It's not a bold sherry whisky but ticks all the boxes. Worn leather, sugared almonds, orange liqueur, golden syrup and coco. Water reveals a little rubber but more of the rolled tobacco and cinder toffee.
Overall: another winner from Zuidam, I've never had a bad Millstone and this is my third, being quite a fussy bugger that's praise. I'd quite happily spend an evening with this if there wasn't a Glenfarclas 17-year-old in the house.