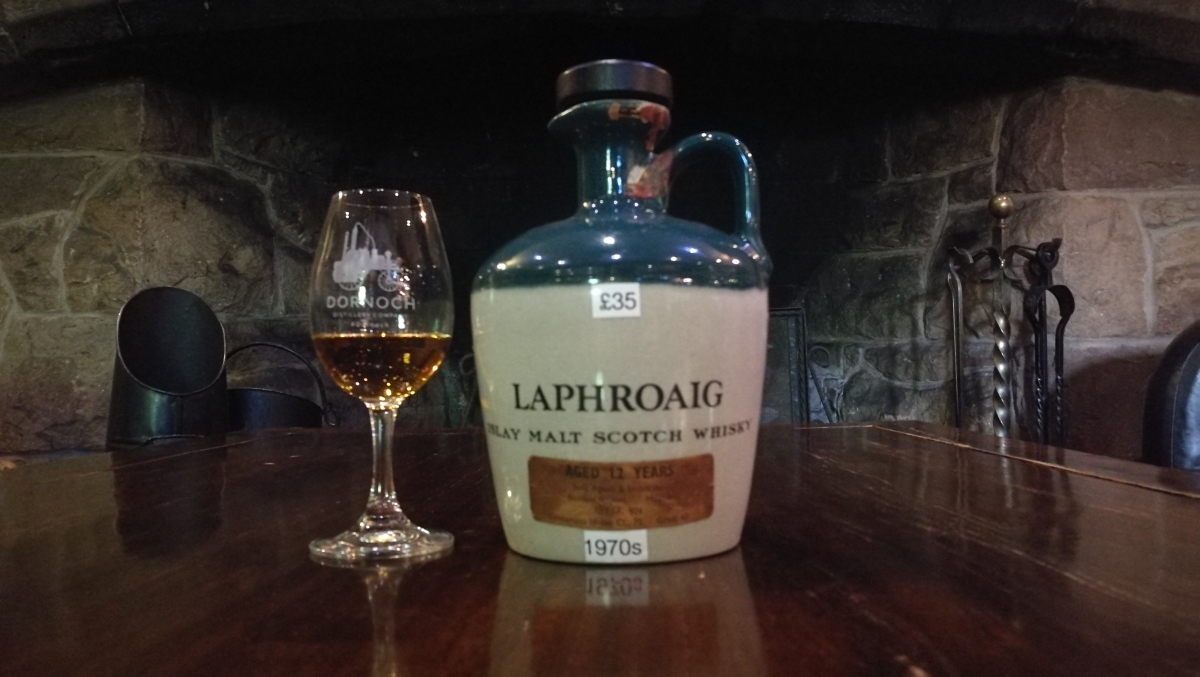 Speaking to enthusiasts at whisky tasting and festivals, it’s clear we appreciate the opportunity to sit down with a dram that promises on paper to be special. Such was the once in a lifetime Old & Rare 101 Masterclass during the Whisky Exchange Glasgow event. A marvellous cavalcade of whiskies followed thereafter, with a series of incredible experiences to be discovered and savoured.
On our table there was a distinct international representation, with an assortment of Europeans and attendees from further a field including Russia. During our tasting of a 1967 Laphroaig, our table discussion turned towards the current range from this Islay distillery. The emotions were clear with some commenting on how disenchanted they had become with the official range as it stands today, going so far as to not even own a bottle. It’s a sentiment I can only agree with, as today’s Laphroaig is a pale shadow of its former greatness. The rot began to set in during the 1970's when the then owners decided to increase the size of the stills, thereby boosting production. The downside being that the distillery character would be lost forever. The distinctive oily Laphroaig quality was consigned to archive bottlings that now demand eye-watering prices.
In today’s brand focused whisky world, marketers will gloss over such minor details proclaiming that they still follow the traditional methods after all this time. Sadly the proof is ultimately in the whisky if you seek out those new discoveries. In my whisky circles, I find the educated deep down lament the loss of Laphraoig and its current status. Others, arguably only sustained by releases during the last 15-20 years seem content and oblivious to what has been lost. 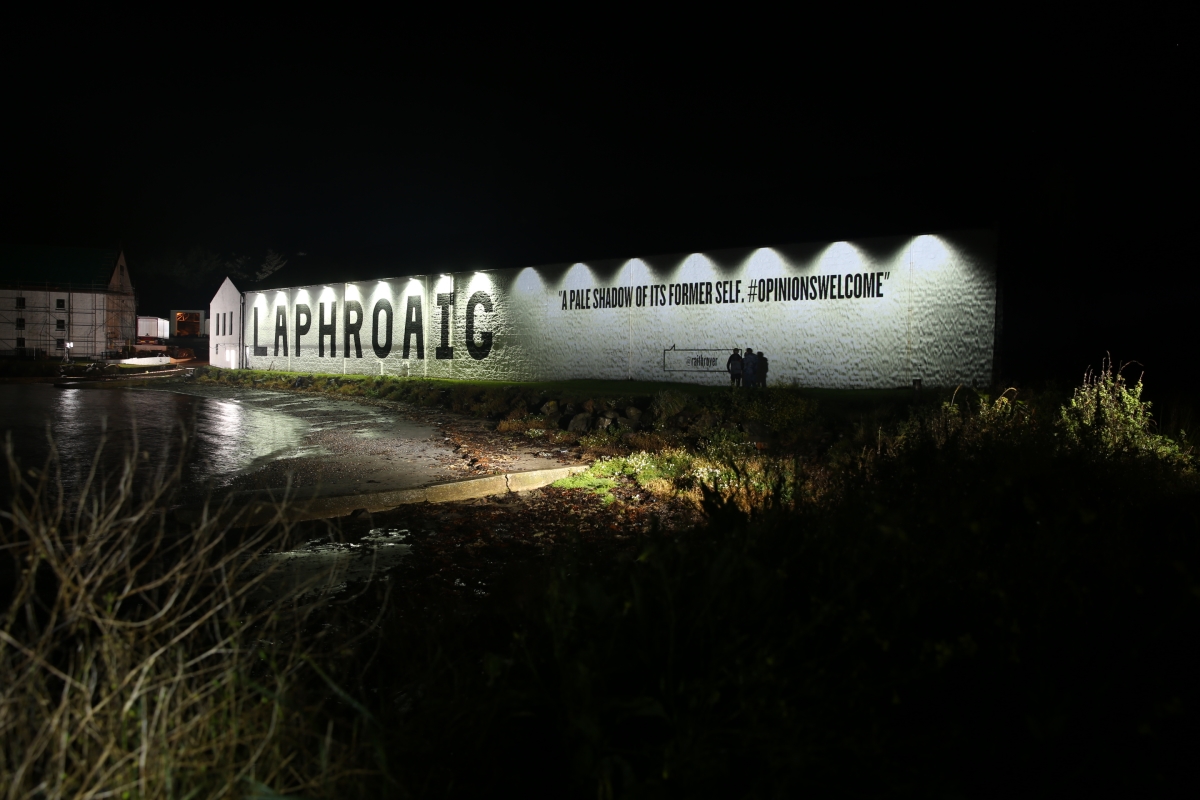 Laphroaig in recent times has fully committed to the No Age Statement sector with a mind boggling array of whiskies that consistently disappoint for their relative prices. Today’s Laphroaig is a peat-buster and little else. The depth of flavour and subtleties have been eradicated and overpowered by the desire to quench the thirst of peat. Spirit cuts have been extended and the peat level ramped up to around 35ppm, which is more than double the level of the classic Laphroaig’s around 16ppm. At this point the image of a dedicated painting restorer comes to mind; scrapping off decades of decay and varnish to hopefully reveal the true splendour beneath this shroud. Unfortunately, I feel such an effort would be in vain as the Laphroaig that many truly love and cherish is gone for good. This explains my Twitter comment that somehow sneaked through the distillery filters and was projected onto the distillery wall one evening showing that #opinionswelcome was indeed the case.
Thank goodness for whisky geeks and bars such as the Dornoch Castle Whisky Bar. It’s a paradise for bottles and enthusiasts, allowing you to explore your whisky fantasies whilst expanding your experience. Following a wee bit of grafting with the Dornoch distillery mashtun and seeing the lads efforts to create their own whisky, I retreated to the sanctuary of the bar itself. It was a roller coaster of an informal tasting kicking off with a 1980’s 12-year-old Oban, 1930’s Glen Mhor, an old Blair Athol followed by a recent Bowmore from the Scotch Malt Whisky Society. All very good, and with fine company there’s few bars that can rival this destination. 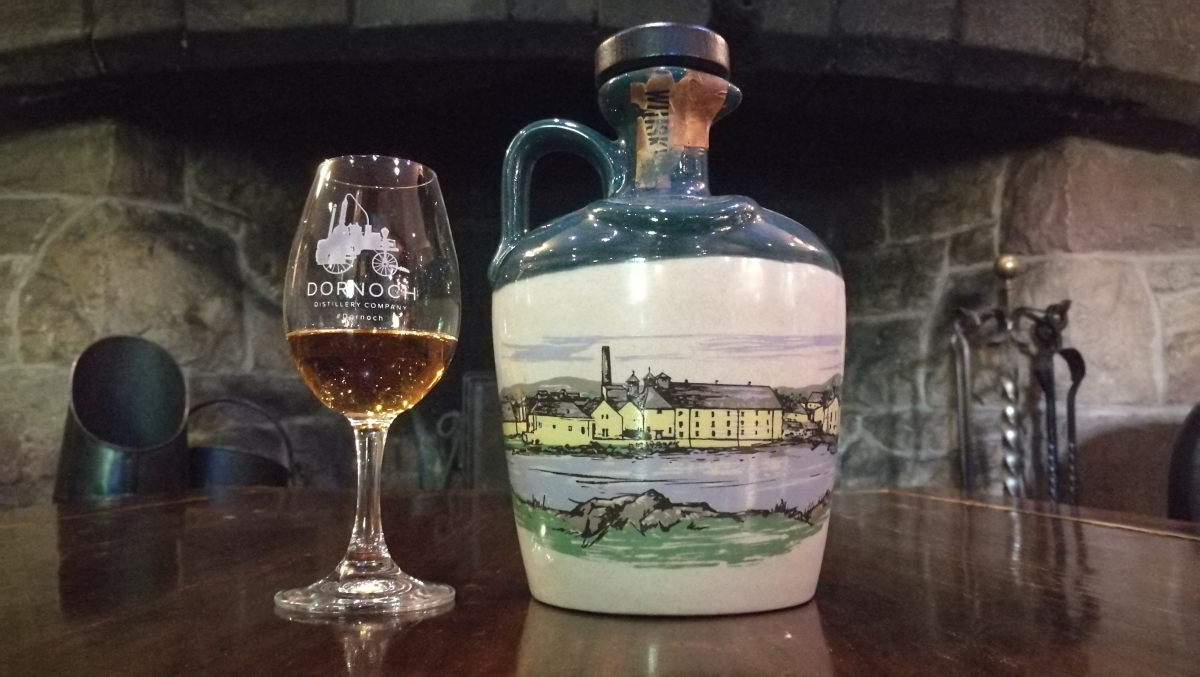 Attention turned to a 12-year-old Laphroaig imported by Bonfanti Import Milan at 43% strength, the precious liquid held within a splendid ceramic flagon. It’s distinctive appearance; complete with a painting of the distillery across its back harks back to a lost era not only for the distillery but also the consumer. Phil acknowledged its increasing scarcity and the rising cost of such vessels that if a replacement were to be sourced, would result in a higher price than the current £35 tag. I felt that this would be a special dram for a more controlled environment, calling for reflection and savouring the experience in my own whisky den, assisted by the 1920’s Blender’s glass.
Colour: gold leaf
Nose: to the fore there's peat but unlike today's Laphroaig it lacks an chemical and astringent edge. More depth exists with a brown sugar sweetness underlying the vegetative qualities. A quality I cannot fathom, almost potato skin peelings, that farmyard quality I associate with Brora. It's more than the peat, which is a mark of the era. It does lack the distinct oiliness I've experienced in much older bottlings. Black liquorice, honey, smoked bacon, smouldering camp embers and caramel.
Taste: more of the caramel and vanilla yes, but its the other characteristics that captivate. The liquorice again, well that's what I'm picking up brings sweetness amongst the Muscovado sugar. A slight saltiness, crispy bacon and a gentle Lapsang Souchong. Returning for the remnants its maple syrup, those fig rolls I used to love and caramelised apples.
Overall: the nose had tremendous presence and the palate is more subtle and refined which comes as a surprise but oh those layers. A marvellous Laphroaig that doesn't reply on a forceful nature and bravado. Orchestrated and statesmanlike, one to saviour.