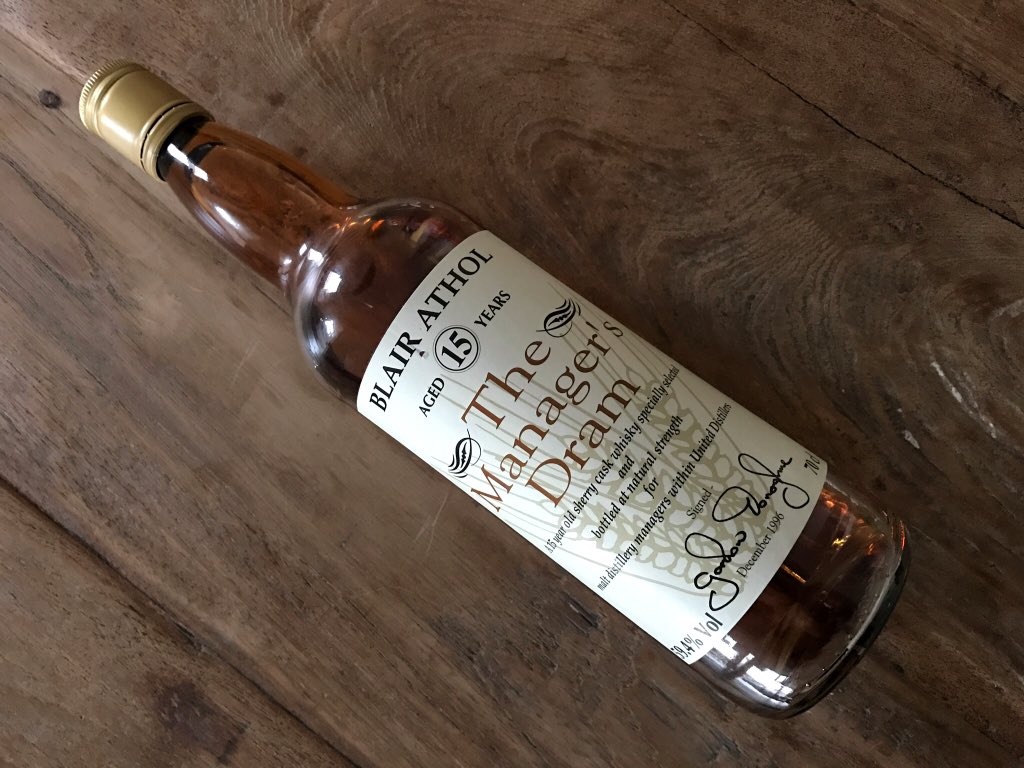 Truth be told I’ve had this Manager’s Dram sample selected by Blair Athol distillery for a while now. A welcome gesture for the forever-generous WhiskyLifeStyle it’s sat in my sample stockade for the best part of a year along with the photographs. When it comes to whiskies and putting my thoughts down on a keyboard there needs to a be a spark of inspiration for things to break the inertia and start rolling.

This isn’t a discredit to Blair Athol that for many visitors to Scotland potentially offers their first experience of a distillery tour and whisky. It’s convenient location on the outskirts of Pitlochry and just off the main A9 route north (and therefore south) is a marketing dream. In 2017 alone I’ve enjoyed the rather tasty 28-year-old bottling from Cadenheads and the current distillery exclusive isn’t too shabby either. Less than 0.3% of the output at Blair Athol goes towards the single malt market making it rarely seen malt on the shelves. That’s not to suggest it’s without validity on its own terms, rather it’s just a vital ingredient of several blends including Bell’s.
These are all points I’ve gone into greater detail on the aforementioned reviews so lets avoid any further repetition. Just bear with me for a moment as I gaze out of the train window seeks inspiration…
What we have with this sample is a perfect example of the symmetry of whisky and many of the values I hold dearly. Firstly, it’s a generous act and great to see such a bottle being opened. I’ve found my Dutch friends, as with many Europeans I meet, are so passionate about whisky and extremely knowledgeable. Yes, occasionally there is a German on a tour that really needs to tone down the anal (brilliant to get that in a review at last) question about fermentation. However, that’s a rare exception and you know the type of person I’m highlighting here. If you really need to know something about chemistry then save it till the end of the tour, as it’s a collective experience you’re souring.
Oh yes, I was in the Netherlands, a remarkable country and my own family tree partially has Dutch roots so I feel a kinship with these remarkable individuals. I’m always ashamed how well the Dutch and other nationalities converse in English. Whereas my Dutch is limited to Lurpak, sorry that’s Danish isn’t it? Point being, my generation didn’t appreciate the impact of the European community and its possibilities. Now sadly only after when subsequent generations have gained that appreciation, we’re about to distance ourselves once again thanks to misguided narrow-minded individuals/areas of the country. Thankfully I doubt our excision will stop the whisky love and visitors from far and wide, who will appreciate the lower value that sterling currently offers whilst we will come to depend more on whisky tourism.

Several years ago the Scottish whisky industry was in a similar position. Scotch was the king and those other countries who tried their hand at distilling Scotland’s gift produced inferior whisky, or something. Eventually time has shown that the rest of the world caught up in the fast lane and overtook this towering incumbent. Our inertia had grown terminal, feeding on past glories and making wholesale changes that undermined the final product. Shareholders may have been satisfied and chemists punching the air with delight at yields, but the final product was and does remain disappointing.
Scotland on the whole has woken up to the competitive realm that the whisky has developed into, although there is still an issue with this focus on cost savings and poor casks. Borders and the point of origin are not the be all and end all. Neither are past glories such as our colonial empire or when we ruled the world… Like the Romans, Greeks and the Tormore's, things change and something better will eventually come along. The intransigence of the whisky industry in Scotland and its slumber has slowly been addressed although problems remain. The air of grandeur still persists, as does a belief that Britain remains great.

Here endeth the lecture and we’re back with this Blair Athol. Bottled in December 1996 at 15-years-old from a sherry cask, it’s a robust 59.4% strength and forms an entry in a collectable series, which I've tackled previously with Manager's Drams from Teaninich and Oban.

Colour: bludgeoned copper
Nose: a rich honey with caramel, tinned peaches and an appealing rubbed brass quality. Yet there’s something sinister on the fringes, beneath the cherry sweetness and calming presence of assorted bar nuts spiked with black pepper. Rolled tobacco again lulls me but there again is a flash of danger a hint of the perfume soap characteristic that so many dread.
Taste: and here ladies and gentlemen we have the problem. A soapy arrival with hints of the sherry cask influence but there’s no denying its presence. Even at this strength it is drinkable as the alcohol is swamped by the soap with flashes of hazelnuts, chocolate and raisins but they struggle against the detergent torrent.
Overall: this takes me back to those infamous Bowmore’s with the perfume quality that are unforgettable for all the wrong reasons. Sadly, you have to question why this cask was selected for such an honour as the Manager’s Dram; clearly this wasn’t the best option in the warehouse. An experience yes and one I won’t be repeating.